Best Blue Light Filter for iPhone and iPad of 2019

"Are cell phones bad for your eyes?" is a common question. With issues like blue light causing eye strain it's an important question, especially with the rise of apps and games meaning we are looking at our devices for longer.

Two of the most popular devices are the iPad and iPhone, and if you use either, you need to know how to reduce blue light on your iPhone/iPad to protect your eyes. The answer is a blue light filter, and in this article, we are going to review the best blue light filters for iPhone and iPad, plus let you know which is our top choice.

There are many blue light filter screen protectors on the market but what company makes the best overall? Find out below. 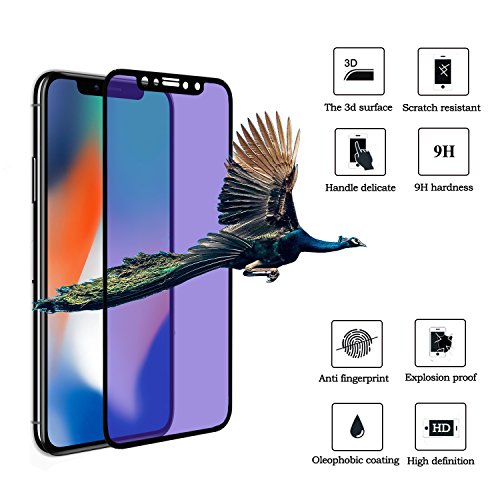 When considering blue light filters for iPhones, we need to find filters that have a great balance between protecting your eyes and protecting the screen of your iPhone. This Pavoscreen screen protector gets that balance just about perfect, allowing you to use your device safely and without fear of the screen being damaged.

Let's start with the main point of our review: protecting your eyes from blue light. The Pavoscreen screen protector has been tested in a laboratory to see how much blue light it could filter, and the result was it filtered around 65%. This means that not only are your eyes being protected, but due to the reduction in eye strain you can look at your screen for longer periods. Great, if you love watching movies or playing games on your iPhone.

The filter also reduces glare emanating from the screen. This gives further eye protection, plus it makes it easier to see what is on the screen.

We mentioned protecting the screen as well as your eyes, and the Pavoscreen filter certainly does that. The first point is that it covers the whole screen. We often see filters that only cover 90-95% of the screen area, meaning the edges are often unprotected. This protector covers the screen all the way to the edges and even goes right into the curved corners.

Fitting the protector to your iPhone couldn't be easier, as it is self-adhesive and has a silicone coating. This should allow the protector to be fitted exactly in position, and for it to sit perfectly with no issues like air bubbles or creasing.

The screen protector is shatterproof, so if you should drop your iPhone the protector will remain intact, and in doing so, keep the screen intact too. It is also scratch proof, so damage to the screen from keys in your pocket or laying your iPhone face down on an abrasive surface should not occur.

No doubt you have often looked at your screen and struggled to see it clearly, due to a load of fingerprints all over it. This filter has a special oleophobic coating which helps to reduce fingerprint marks and makes it very easy to clean with a simple wipe using a dry cloth. 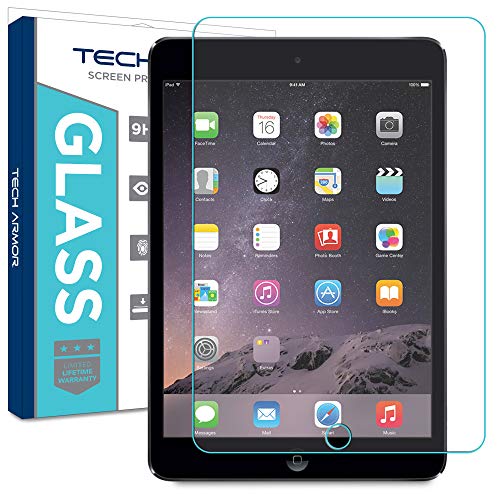 No review of the best blue light filters for iPad could ignore the Tech Armor Apple iPad Air RetinaShield Screen Protector. It is a robust screen protector which protects both the product screen and the product users' eyes, and it does so for a very low price, too.

One issue which frequently occurs with accessories made for products is that there are often numerous versions of that product with variances in size and configuration. This applies to the iPad, so it is great to see that this blue light filter and protector fits several versions. As well as the iPad Air, it can be used to protect the screen on the iPad Air 2 and the newer iPad 9.7 which was released in 2017.

In terms of screen protection, this Tech Armor filter can prevent the screen of your iPad from scratching. This is often caused by the device being put down, with the screen side meeting an abrasive surface underneath. Another cause of scratching is items inadvertently coming into contact with the screen.

Obviously, the best way to prevent scratching is not letting the screen touch anything that might scratch it, but this is practically impossible to achieve. The solution is a filter or protector such as this which the items touch instead of the screen, thus reducing the chances of it being scratched.

The filter is very easy to install, with a simple peel away layer which allows you to then stick it to your iPad screen. It will be bubble free, and should fit perfectly, as the audio slot and space for access to the front panel key are sited exactly where they need to be.

The reason many people consider blue light filters for their iPad is the harm blue light can cause. It can obviously cause eye strain as mentioned previously, but it can also interfere with our sleep patterns. With the Tech Armor these issues should not arise due to its highly effective blue light filtering properties.

It incorporates Tech Armor's own 'Retinashield' technology which will filter around 50% of all the blue light which is emanating from your iPad screen. In effect, this means reducing the chances of eye strain, eye damage, and sleep pattern disruption by 50% too. The other benefit is that with these reduced levels of blue light, you can use your device for longer periods without eye strain occurring.

A last note about what comes with the Tech Armor blue light filter: apart from the instructions on how to fit it, you also get a handy microfiber cloth to smooth the filter, and dust removal tape to keep your iPad dust-free. 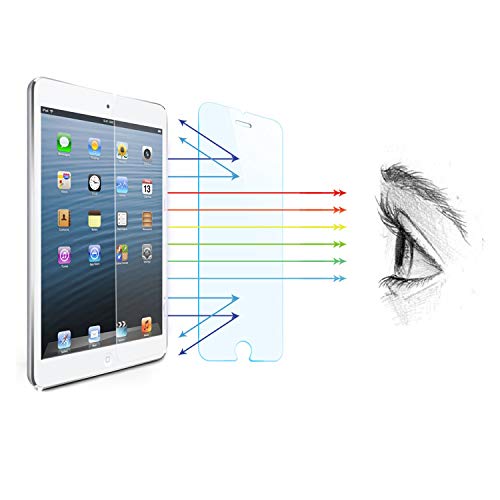 For those of you that use the iPad Mini, this screen protector and blue light filter should interest you greatly. It is the iPad Mini Tempered Glass Screen Protector which does an excellent job of protecting both your screen and your eyes from being damaged.

In terms of blue light and the damage that it can do to your eyes, using this sort of filter on your iPad is one of the simplest and easiest ways to prevent the harmful effects. The I-Deal blue light filter has been designed to block up to 90% of the blue light which comes from your iPad screen, but it goes even further than that.

UV light is often forgotten due to the public's increased awareness of blue light, but it can also damage your eyes, and often with worse consequences. It can cause macular degeneration which, in the worst instances, can lead to blindness. UV light can also cause cataracts. Thankfully, this filter from I-Deal will eliminate up to 98% of the ultra violet light from your iPad screen giving your eyes even more protection.

Now that we have given your eyes some protection from your iPad screen, we now turn to protecting the screen itself. With the I-Deal protector being made from high-quality tempered glass, that should indicate to you that it is not going to be prone to shattering if you drop your iPad. This is an important feature as it can mean the difference between your iPad screen shattering or staying intact if the device is dropped.

Scratches are another way in which many iPad screens get damaged. This is often caused by keys, pens, or coins rubbing against the screen as it is being carried in a bag. Scratches also happen when the device is laid screen down or when someone bumps into you as you are carrying your device. The I-Deal screen protector will eliminate virtually any chance of your screen being scratched thanks to its tempered surface.

One of the things we love about this product is the fact that instead of just one screen protector, you get two. This means you can give the other one to another member of your family to use, or if no one else in your household has an iPad, you can keep it as a spare. 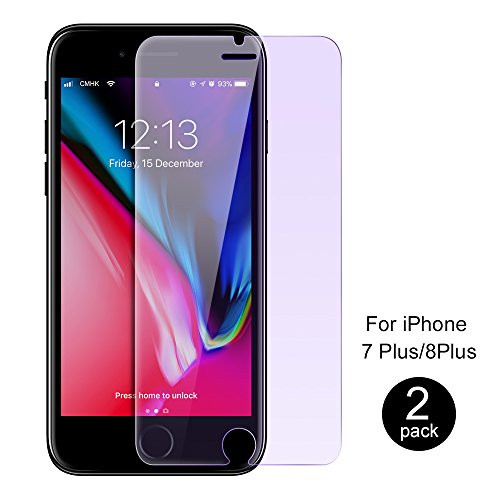 If you have ever wondered "Are phones bad for your eyes?" then the answer should be no, they aren't, provided you take some simple steps to ensure your eyes are protected. If you have an iPhone 7 or 8, one of the best ways to do this is fitting a protector or filter to your screen, and there are few better or more affordable than the Iconflang iPhone Screen Protector.

Before we even talk about its qualities, we must mention that we are extremely impressed by the great value that Iconflang delivers for the price when you buy this product. It is currently priced at less than $10, which would be good enough, but for that, you get two screen protectors, instead of one, which is as good a deal as we have seen for iPhone screen protectors. However as we often say, the price isn't everything, and value for money is only valid if the product performs as it should, so let's cover that now.

In terms of protection for your iPhone, the first thing to mention is that this protector is made from tempered glass. This gives it the strength to withstand a lot of bumps, knocks, and even drops, and allows it to absorb these so that your screen doesn't.

The other main protection you would want to have is against scratching, which is one of the most common ways in which iPhone screens are damaged. Your pocket is the location in which this is likely to happen as coins, keys, pens, and even tiny pieces of dust can attack your screen and scratch it. With the Iconflang screen protector, these and anything else trying to scratch your iPhone screen are not going to succeed, meaning your screen stays scratch-free.

Fingerprints are a nuisance, especially when they obscure or blur something you are trying to see on your screen. The oleophobic coating on this protector means the oily substances from your fingers and hands do not get the chance to leave marks or prints.

Let's discuss the main reason you need a filter on your iPhone screen, and that is to protect your eyes from blue light. The Iconflang's filtering technology makes sure that blue light is reduced significantly, making prolonged use and viewing of your iPhone safer and more comfortable for your eyes.

As we have looked at blue light filters and screen protectors for both the iPad and the iPhone, instead of just choosing one top product, as we normally do, we are going to pick two: one for each device.

Our top premium choice for any iPhone & iPad blue light filter is RetinaGuard. See the options at the top of the page.

If you're looking for more cost-effective choices for the iPad check out the I-Deal iPad Mini Tempered Glass Screen Protector. This offered great protection for the iPad screen in terms of reducing scratches and the chances of the screen shattering if the device is dropped. Its tempered glass construction certainly helps in this regard. It also produces great reductions in the amount of blue light and UV light, so that your eyes are well protected. Finally, getting two filters instead of one makes this a great value for the money, too.

For the iPhone, we had two choices and although the Iconflang offer was a fantastic deal, we opted for the Pavoscreen iPhone X Screen Protector. The simple reason for this is that the Pavoscreen protector offered far superior levels of protection for the user's eyes, as well as the screen. Its tempered glass offers more in terms of scratch resistance and protection against the screen shattering, which ultimately is how these products should be assessed.